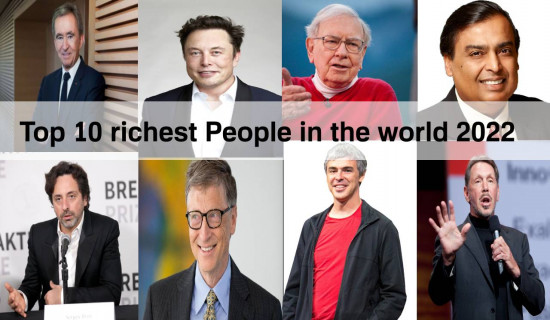 Top Wealthiest Man of the world in 2022 starts with:

In the List of Top Wealthiest Men of the world in 2022 Elon Must is the business magnate and the founder of SpaceX and the CEO and product Architect of Tesla. The net worth of Elon Musk is his worth is $209.2 Billion, which is the sum of stakes in Tesla, Space Exploration Technologies (SpaceX), The Boring Company, Twitter, etc., and cash availability of $17.8 Billion.

2. Top Wealthiest Man of the world in 2022 : Bernard Arnault

Bernard Arnoult is a French Businessman. He is co-founder, chairman, and Chief Executive of LVMH Moët Hennessy Louis Vuitton commonly known as LVMH is French Holding Multinational Corporation and conglomerate specializing in luxury goods, headquartered in Paris. Arnoult and his family’s net worth of US$ 155.9 billion dollar in October 2022 According to Forbes.

Gautam Adani is a chairman of Adani Group with control of ports, airports, power generation, and transmission of green energy, edible oils, cement, and real estate, among others. According to Forbes, the net worth of Gautam Adani is US $132.1 billion. He is the Riches person in Asia and the third richest person in the world.

Jeff Bezos is the founder of the E-Commerce giant Amazon, which was founded in 1994. Amazon is currently the biggest E-commerce website in the world. He step down as CEO in 2021. As of October, the total net worth of Jeff Bezos is US $120.1 Billion.

5. Top Wealthiest Man of the world in 2022: Warren Buffet

Warren Buffet is an American Businessman and Investor. He is the chairman and CEO of Berkshire Hathaway. His total net worth is US $102.6 Billion. He is the most successful investor of all time. He has promised to donate 99% of his wealth and again most of the wealth he has donated to the gates foundation.